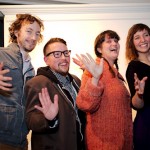 Calgary has a demolition addiction and a collective of local artists striving to transform 11 houses scheduled for destruction into wonderful pieces of temporary art has won Awesome Foundation – Calgary’s February 2013 $1,000 micro-grant.

Art is good. Big Boats are great.  Big Art Boats are AWESOME. The Los Angeles Awesome Foundation is proud to award its February Awesome grant to LA-based artist Yaron Michael Hakim. With help from our $1,000 bucks –  and his own two hands – Hakim is building a 22-foot sailing vessel known as a proa, which he will sail 22 miles across the sea to Catalina Island in mid-March as part of his greater body of work focused on travel and life-journey.  Along his two-day trip, all by his lonesome, he’ll will be capturing stills and video that will be used later for an exhibit on April 25, 2013 at the University of California – Irvine. You can track the progress of this truly awesome live action art piece, check out unutea.wordpress.com/

This past November, we at Awesome Foundation Winnipeg awarded our first grant. It went to Lunches with Love, a small charitable organization run by 12-year-old Nate Unrau and his mother Elsie. They accept donations of winter clothing and food items, and use that to provide Winnipeg’s Main Street Project with sandwiches and warm clothing. Lunches with Love was started in October of 2012, after Nate attended an event called We Day, at which youth are are encouraged to make a difference in their communities. On their first day, they donated 47 lunches to the Main Street Project. Now, Nate is being invited to speak to the other students of his old school about how to do what he did. Every second Saturday since then, the Unraus gather volunteers in their home and pack hundreds of lunches: Tuna salad, egg salad, oranges, bottled water, and sometimes other things. Every Sandwich Day since they started, Lunches with Love has made more and more sandwiches. Their original goals were for 100-130 lunches each time. Nate and Elsie were able to put the Awesome Foundation’s grant to quick use. The day after the award ceremony, they braved the bitter cold to buy 120 pieces… read more →

It’s been a few weeks since we handed out our FIRST GRANT to the totally rad and ever-worthy Arthur Morgan for his project, Gather Baltimore. That picture to the right is the dashing Morgan getting his cool cash dough from Awesome Baltimore Trustee, Briony Hynson, and Guest Trustee, Dixon Stetler! Yippee!Our kick-ass trustee, Chloe Gallagher talked to the Gather Baltimore folks to gain some insight into how and why they do the work they do. Awesome Baltimore: How did the idea of Gather Baltimore originate? When did you decide that you needed to make it a reality? Gather Baltimore: The epiphany hit Arthur Morgan at the Farmers Market one Sunday morning. Just before noon, when the market was to end, vendors would begin throwing away food they could not sell. Morgan watched as hungry people rummaged through the discarded food, even picking up produce that had fallen on the ground. “I said, ‘Holy Moly! Look at all this food that is going to waste,’” Morgan says. So Morgan, himself an urban farmer, devised a way to salvage some of the scraps by collecting the food in bins and transporting it himself by pickup truck to Our Daily Bread, a nonprofit that serves daily meals… read more →

On Thursday, 21 Feb 2013, Awesome Kingston gathered at the beautiful Renaissance Event Venue to hear some great pitches from the community and host Awesome Hours. Check out how it went!