This past November, we at Awesome Foundation Winnipeg awarded our first grant. It went to Lunches with Love, a small charitable organization run by 12-year-old Nate Unrau and his mother Elsie. They accept donations of winter clothing and food items, and use that to provide Winnipeg’s Main Street Project with sandwiches and warm clothing. 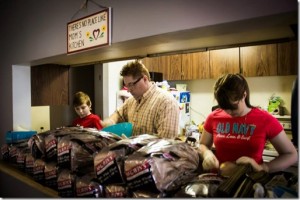 Nate and volunteers hard at work creating each sandwich.

Lunches with Love was started in October of 2012, after Nate attended an event called We Day, at which youth are are encouraged to make a difference in their communities. On their first day, they donated 47 lunches to the Main Street Project. Now, Nate is being invited to speak to the other students of his old school about how to do what he did.

Every second Saturday since then, the Unraus gather volunteers in their home and pack hundreds of lunches: Tuna salad, egg salad, oranges, bottled water, and sometimes other things. Every Sandwich Day since they started, Lunches with Love has made more and more sandwiches. Their original goals were for 100-130 lunches each time. 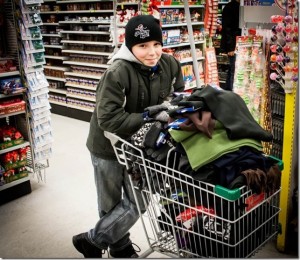 Nate and Elsie spent over $200 on winter clothing for the homeless.

Nate and Elsie were able to put the Awesome Foundation’s grant to quick use. The day after the award ceremony, they braved the bitter cold to buy 120 pieces of winter clothing from the Dollar Store, including toques, balaclavas, mittens, and scarves, using $270 of the grant.

For each of their next three sandwich days, they spent around $200 on ingredients. On their shopping list were ingredients like the following: 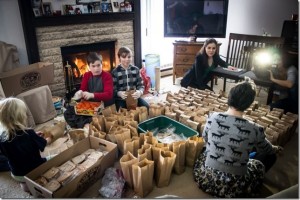 And it worked! After three more sandwich-packing days of epic proportion, the grant money was almost gone; but by this time, they’d amassed a following on Facebook and other sites that picked up where the Awesome Foundation funds left off, and Lunches With Love has been gaining speed constantly. As of February 16th, they were packing 334 lunches and they’ve donated a total of 1797 lunches to Winnipeg’s poor. They expect to surpass the 2000 mark this coming Saturday.