By Ted Alcorn (Awesome NYC Trustee) On an island of concrete between four lanes of traffic, shaded by the Brooklyn Queens Expressway above and washed by the sound of traffic all around it, three designers see an opportunity for light and beauty. Their vision, Silent Lights, is a series of six gates that light up sequentially based on the intensity of sound and vibrations from oncoming traffic: “the transfer of aural sound into visual light.” The designers—Valeria Bianco, Michelle Brick and Shagun Singh—are the July grantees of Awesome Foundation-NYC. The Awesome Foundation-NYC grant will provide funding for LEDs and arduinos for the gates, bringing light and movement to the installation.  “Once connected, the LEDs will translate the patterns of the surrounding traffic noise into an interactive wave of light and make Silent Lights a living and breathing piece of art,” wrote the designers. Awesome Foundation-NYC admired their perseverance, their originality of vision, and their efforts to bring something beautiful to the community. Silent Lights has received funding from the New York City Department of Transportation, the Design Lighting Foundation, and the Brooklyn Arts Council, and while the designers continue to raise funds, they hope to complete the project by the end… read more → 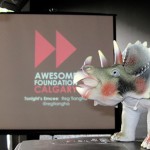 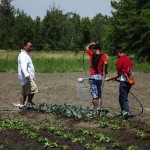 LA are you ready for the biggest awesomest picnic ever? In May we gave away 1000 to  Danny Cohen and Farley Elliot to build one giant kick-ass picnic . We’re excited to announce that the wait is up : LA get ready for one yummy afternoon and join Danny, Farley and the Awesome Board for a colossal good time:

Don’t we all dream of being awesome parents? The Los Angeles South Bay chapter of the Awesome Foundation is pleased to announce that our first grant – awarded on July 7, 2012 –  will support parents everywhere in getting one step closer to that dream. No, its not free tickets to Disneyland. Pearent.com is an interactive platform that incorporates the ideas of child psychologists, educators and researchers of the Pear model of parenting.  The grant will be used to create interactive visual modules that demonstrates how to bring out the inner awesomeness of every child. It is one small step for the Awesome Foundation and one giant step for parents everywhere.