Our community was saddened to hear of the recent passing of our friend Luciano Sother. Luciano was the founder and leader of the amazing Rio de Janeiro chapter, and a tremendous force for awesome in the universe through his many projects and interests. Many of us had the good fortune to meet Luciano during the AweSummit in Cambridge this past summer, which for the first time brought together trustees from around the world to celebrate and share our stories with one another. He was remembered by all who met him for his great sense of humor, his warm friendship, and his commitment to making a difference. We were tremendously lucky to have his presence there. Though the chapters of Awesome Foundation take on many forms around the world, we are united in a core belief: that one can find things that surprise and delight in all corners of life, and that it is important — critical, even — to support and share that delight with others. In our brief time together, Luciano stood out as a rare person who deeply embodied this spirit, and inspired it in others, too. We can’t have wished for a better partner and friend. We’ll… read more → 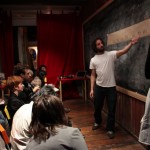 Planet Orchestra Performing for Foundation Board Members on October 19th, 2012   What happens when you combine curious kids, eager parents and a whole bucket load of orchestral instruments?  You get planet Orchestra.  Los Angeles South Bay Awesome Foundation (yes, that’s a mouthful isn’t it?) was excited to the brim to award it’s second grant to a growing group of devoted musicians based out of Lawndale California.  These musicians aren’t your ordinary orchestra, they are youth that are given free lessons, an instrument and (most valuable of all) a nurturing environment in which “to come together to achieve the common good of making music.”  Planet orchestra has grown, from its inception in 2010 with a group of eight children, to a thriving group of professional musicians, volunteers, parents and children. Based in Lawndale, Planet Orchestra has grand ideas and does not plan to stop with just a few lessons to a few kids.  This energetic group of social entrepreneurs hopes to use its existing system to spring board into school classrooms, dance studios, and (in the words of Buzz Lightyear) to infinite and beyond!  There’s little doubt that Planet Orchestra will continue to impact lives and make our world a… read more →