and the South Bay Awesome Foundation is rewarding The Bella Foundation for their deep inner beauty. The $1000 grant goes to “Childrens Portraits for Struggling Mothers.” A picture is worth a thousand words and provides a lasting memory that is forever. Working with a local womens shelter, Ms. Ward, the project leader on this one, used her photography skills to provide a beautiful family photo to women and their children who otherwise might not be able to afford one. At a time when money is tight, the women were happy to bond with their children around the photo. HOW AWESOME IS THAT? Besides writing a mandatory by-law that says that chocolate must be eaten at every meeting, the four girls: Avery Ward, Annaliese Snowhook, Rebecca Schomer, and Alicia Schomer are serious about making the world a better place. The girls are on their way to non-profit status and using our Awesome grant, have been propelled to a higher realm.  They are already making plans for future projects which include other photo days with Richmond Family Center, working the a local stable to provide lessons for autistic children, and providing improv classes to local youth. The Bella Foundation proves that a… read more →

April showers got you down?  Re-energize with Awesome Kingston’s April Pitch Party and Awesome Hours!  Come out to the RCHA at 6:30PM on Thursday, 18 April and see what cool new ideas want a $1,000 microgrant to make our city even more awesome.  RSVP on the Facebook Event so we know how many people are going to be partying with us on the 18th!   Never been before? No worries! It’s really simple and rather informal. Every month, people apply to the Awesome Foundation for a microgrant. We select the ones that we think are the most awesome for the month and invite them to give an ‘elevator pitch’ to the audience, for which they have 90 seconds. Following that, they take 7 minutes of Q&A from the audience. Once all the pitches have presented, the ten trustees go and “scrum” – or, decide who walks away with the cash this month. It’s not only a free, fun, and inspiring event, it’s also a great place to meet and network with Kingstonians who are passionate about community and the continual improvement of our city. Invite your friends and come on out to the RCHA by 6:30PM to grab a drink and mingle before the pitches… read more →

The New York chapter is proud to announce that our April grant has been awarded to Nametag Day, which on June 1, 2013 will distribute 200,000-nametags around New York City. The purpose of the event is to get people to talk to each other. But more than that, it’s about bringing a culture of openness to this sometimes standoffish city. Read more on our April project page!  And don’t forget to follow Awesome NYC on Twitter and Facebook.

Sixteen-year-old music-enthusiast, photographer, and engineer-in-the-making Noah Klein attended Burning Man last year, which filled him with a need to participate and contribute to the odd and unique marriage of music and art for this year’s festival.  His answer: a reworking of Ruben’s Tube, a flaming cylinder that gives musical wavelengths a physical shape with fire (think: propane-fueled iTunes visualizer). To give it his own spin, Noah has rehashed this traditional construction by finding a discarded grand piano, digitizing its keys, and hooking the mechanism up to his own Ruben’s Tube.  His words: “I think it would be quite the spectacle to have someone be able to preform Mozart’s 5th Symphony and have it visualized with fire right in front of them.” Awesome LA, with the consent of Noah’s enthusiastic, patient, and trusting mom, have awarded Noah with an Awesome grant to foster young, analytically minds and add a spark to Burning Man 2013 . Flame on. 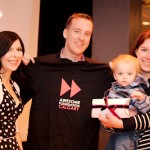 One in five Canadian moms struggle to provide clean diapers for their children. Kristina Prins has organized a city-wide diaper drive to address the need and bring awareness to the issue, and she has won Awesome Foundation – Calgary’s $1,000 no-strings-attached micro-grant for March 2013.