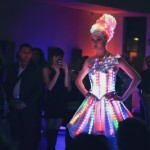 “Oh my god, it’s full of stars” The Trustees of the Awesome Foundation’s London Chapter are delighted to announce the winner of their inaugural fellowship: Oscar Lhermite’s ‘Big Dipper Project‘. As our cities become increasingly populated, the man-made mix of pollution and light have all but banished the stars from our skies, eroding our magical relationship with these distant balls of white-hot plasma. ‘The Big Dipper Project’ is an attempt to recreate the constellations in the night sky over major cities using a combination of black helium balloons and white LEDs. Oscar, a French product designer and artist currently studying at the Royal College of Art in London, has been perfecting his technique by tethering his stars in a variety of configurations across the city. He aims to use the money to turbo-charge his efforts, bringing in bigger balloons, arduinos and advanced software to ensure precise star locations and minimal drift. This will culminate in a recreation of The Big Dipper somewhere over London later this Summer. (Photo by Cormac McGloin) The London Trustees were impressed with Oscar’s passion and enthusiasm for his ideas, and chose him for the May Fellowship because of this project’s general awesomeness, its connection with… read more →