Last month, the Los Angeles chapter of the Awesome Foundation invited three grant applicants to pitch their ideas, “Shark Tank”-style, to a panel of billionaires. Okay, so they were fake billionaires, and the whole thing was part of a comedy show, but it did not lack for awesomeness. The Awesome Tank Show, presented at the Upright Citizens Brigade Theater in Hollywood, gave the people behind three diverse projects an opportunity to present their ideas in front of a live audience. The show was hosted by LA trustees Matt Walsh and Scot Armstrong, and featured some of the theater’s funniest improvisers portraying notable billionaires Richard Branson, Mikhail Prokhorov, and the gossipy founders of the “Home Shopperficial Network.” After peppering the presenters with ridiculous questions, the judges agreed to award a thousand dollars to all three applicants! Grants were provided to Story Pirates, which teaches writing and literacy through improvised musical comedy; Trash Club, a grassroots community cleanliness organization; and Libro Libre, which provides books free of charge to inmates at California state prisons. 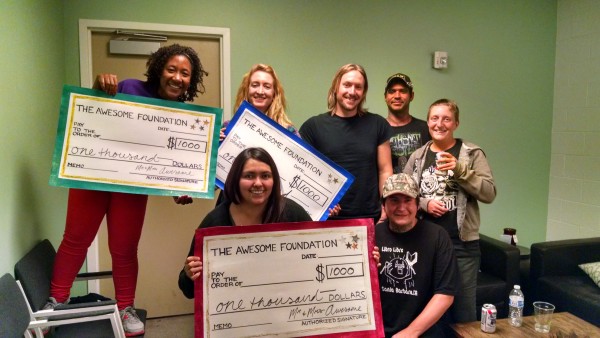 Congratulations to the winners, and special thanks to the UCB Theater and everyone who came out to see the show. The LA chapter hopes to put on more Awesome Shark Tank shows soon, so if any billionaires are reading this, please get in touch.