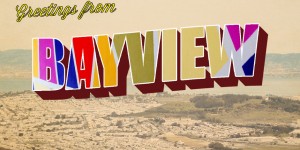 The following is an interview with San Francisco’s April 2013 grantee, Hunter Franks, about his SF Postcard Project.

The SF Postcard Project encourages community connection through storytelling exchange. 1) Participants in marginalized neighborhoods fill out a postcard with a positive personal story of their community. 2) Postcard is mailed to a random San Francisco resident to initiate stronger connections between people and communities.

How did it come about?

Hunter: While I was working for the San Francisco Mayor’s Office of Civic Innovation, I had the opportunity to work with youth in the marginalized Bayview neighborhood of San Francisco. Bayview is tucked into an isolated Southeast corner of San Francisco. Most San Franciscans don’t have a reason to go there. They only know what they see on the news: violence, drugs, and poverty. But, there is much more to these communities — stories that the larger population never sees or hears about.

The youth I worked with wanted to tell these stories to the rest of the city. They wanted to change people’s perception of Bayview and they wanted to attract people to the positive stories and places in Bayview. Perception and behavior change are not easy things to accomplish, so I set out to find a simple way to encourage others to start thinking about the good things in Bayview.

I had previously thought about the idea of personal story exchange using postcards and I thought I could tweak that idea to achieve my goal to build community connection. There was one catch to this exchange. I wanted the recipients to have no idea that they were going to receive a postcard.

What are your assumptions?

Hunter: My biggest assumption is that people care about and want to hear the positive stories from these marginalized neighborhoods. But, the beauty of the project structure is that they are going to hear the story whether they want to or not because it is being delivered directly to their mailbox. Sheer curiosity upon receiving a postcard will get them reading it. That alone is a win. If they think about a neighborhood in a new light for even one minute, this project has succeeded. If they go further than that and write back to the author of their postcard, or go explore that neighborhood, then the project has succeeded even more.

What do you think you’ll learn?

Hunter: I’ve already learned exactly what I want other people to learn. These neighborhoods are not as bad as we hear on the news. The people that live there are people just like you and I. They may look or talk a certain way, but take a moment to listen and you will realize they have stories just like yours.

The first time I went to Bayview to collect postcards, I was admittedly nervous. Like most of San Francisco, all I knew was what I had seen on the news — violence and crime. But I quickly realized Bayview is a vibrant community with a lot of wonderful places and stories. I hope this project can broadcast those positive stories so that others can get to know the real Bayview as well, not just what they see on the news.

I’ve also learned that all people need is a light touch. A simple reason to think in a new way. A simple reason to interact with a new person. A surprise postcard in the mail provides that. No immediate action is required of them. They don’t have to engage with anyone. They simply have to read a story. From this story, a new connection can be formed. 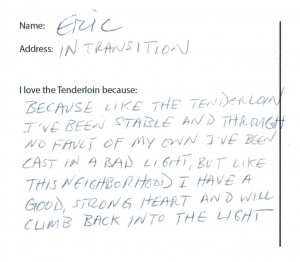 For the future, do you envision any possible expansions to or iterations on the project?

Hunter: I’ve already expanded the project from the Bayview to the Tenderloin neighborhood. Like Bayview, the Tenderloin has a negative reputation with many San Franciscans. I have also experimented with the prompts on the back of the postcards. The Tenderloin postcards prompted “I love the Tenderloin because…” and included the option for the participant to add their address so that the random recipient of their postcard can respond directly to their postcard.

This project also has the potential to be used with any community of people that the larger population don’t regularly interact with. For example, an organization that serves autistic children could mail out postcards to potential volunteers with pictures of the kids and their stories. They would surely get a few people who would want to volunteer. People that previously had no reason to think about or interact with autistic children. People are scared of what they don’t know. This project helps them think about, explore, and connect to new communities.

The Awesome Foundation grant will allow me to print and mail more postcards and broadcast more and more positive personal stories to initiate stronger connections between people and communities.