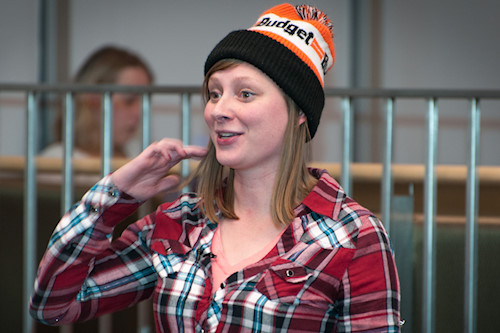 Awesome Foundation – Calgary goes retro, lumberjack style, as we’re pleased to announce that Karilynn Thompson is our $1,000 micro-grant recipient for the month of October with The 2nd Annual Log Driver’s Waltz: A Plaid Party!.

The gala is a family-friendly event featuring GIANT five-storey tall retro-animations shown on the side of the Southern Alberta Jubilee Auditorium, fire-pits, hot chocolate, DJs, honky-tonk bands, food trucks and much, much more. You can even learn some basic animation techniques yourself courtesy of workshops happening that evening too.

As a part of the GIRAF Animation Festival by the Quickdraw Animation Society, this event creates an excuse for families and friends to get together over a burn barrel, roast marshmallows and watch nearly-forgotten animations, all of which are important parts of Canadiana.

AF-Calgary’s $1,000 micro-grant will allow Karilynn to rent the 35,000 lumens projector needed to display the animated shorts on the side of the auditorium. By using the money to cover equipment costs, Karilynn can ensure that the gala’s expenses remain low and that the Plaid Party remains a free or low-cost event for all Calgarians to enjoy.

If you’re in the Calgary area, the 2nd Annual Log Driver’s Waltz takes place outside the Southern Alberta Jubilee Auditorium (1415 14 Ave NW) in the north lobby and parking lot on Sunday, November 4 from 7 p.m. to midnight. It’s an all-ages event, so make sure you wear your best plaid and get set to enjoy some retro Canadiana cartoons!

Four great ideas were pitched to the AF-Calgary Trustees at our October Awesome Calgary Thousand Dollar Thursday Pitch Night event, including a nice serenade by a saxophonist courtesy of the Westwinds Music Society. To see what other kinds of Awesomeness were on display that night, check out our recap on Brett Gilmour