What would make LA stop, drop and …eat? Well this months Awesome LA winners, Farley Elliott and Danny Cohen, think they have the answer: one giant kick-ass picnic. In a city that is far too often characterized by its traffic, and its residents constant rush to get from point  A to B – these two awesome individuals want to given LA a reason to stop for a bit, enjoy the day and break the bread with their fellow Angelenos! In their own words:

Picnic baskets, blankets, kites – all the makings of a classic picnic, but on a massive scale. Baskets as big as a sofa, Paul Bunyan-sized sandwiches and enough grapes to make Caesar blush. It’s a giant picnic in size, scope and mission. There will be food, games and an open invitation for anyone and everyone to stop by and meet their neighbors.

Here’s a few more awesome facts about these two picnic-neers :

1. They are improvisers at the amazing Upright Citizens Brigade (clearly they know how to have a good time!)

2. Have you heard of Minutiæ ? If you haven’t you should check this brilliantly satirical magazine that Danny and Farley co-edit!

We’re not about making a political statement or saving the world, we’re just about bringing people together for some really awesome giant picnic shit.

So… stay tuned for details on some really awesome giant picnic shit!!! 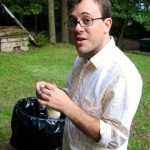 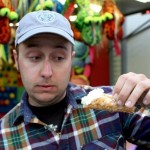