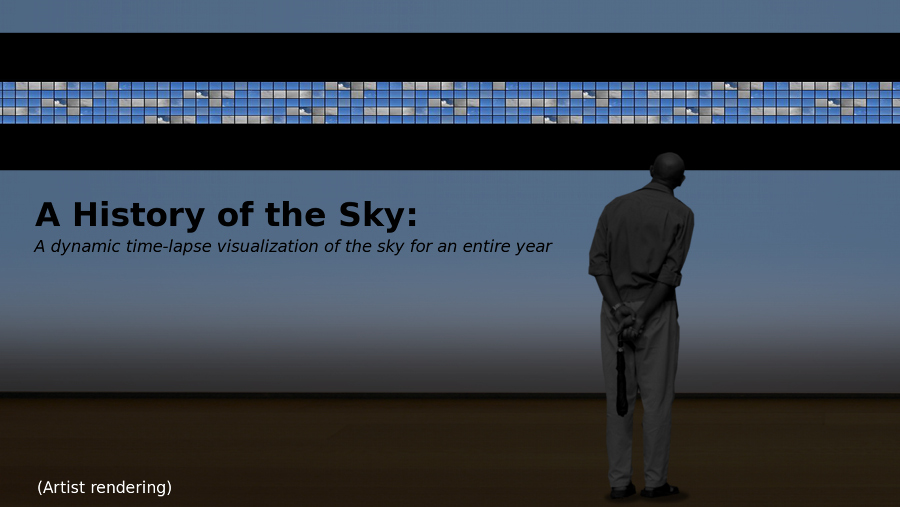 The Board of the San Francisco Awesome Foundation is proud to announce our first grant goes to Ken Murphy’s “A History of the Sky”. It’s local, it’s awesome, and Ken’s proposal was clear, enthusiastic, and specific about what an Awesome Foundation Grant would be used for (equipment for installations).

“A History of the Sky” is a time-lapsed visualization of the San Francisco sky over the course of a year. Ken mounted camera equipment to the roof of the Exploratorium and it an image every 10 seconds for a year. As Ken wrote, “The results are assembled into a large mosaic of time-lapse movies, where each tile represents a single day, and all of the days are in sync.”

Future goals include obtaining  equipment to display the project at different venues and eventually a permanent space for the exhibit. Ken’s work can also be supported through his Kickstarter campaign. (Great video of his proposal can be found on Kickstarter) “History of the Sky” in progress will be shown at the Maker Faire in San Mateo May 22-23.

The SF Board of Awesome would like to acknowledge that there were many compelling submissions for our first round of grant making. Projects that promote women’s entrepreneurship, music appreciation, DIY biology, transformative sculpture, and kittens (!) were pretty damn cool too.

June grant applications are due Thursday June 10th. Please tell us why your project is local to the Bay Area, awesome, and why $1k would make it even more awesome.