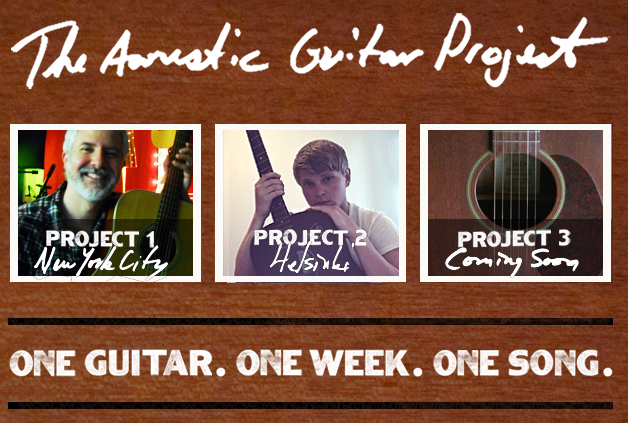 Dave Adams is not a musician. But he’s a devoted believer in music’s power to inspire creativity, community and emotion. So one day, Dave bought a used guitar, gave it away to someone who could use it to make music — and started The Acoustic Guitar project.

1. The musician has one week to record an original song using only a used acoustic guitar and a handheld recorder provided by The Acoustic Guitar Project. No editing or post-production is allowed.

2. When the musician is finished, they sign the guitar, take a picture of themselves with it, and choose the next musician to participate. The guitar travels to a new musician every week, becoming a viral memento.

Today, the first traveling acoustic guitar is with its eighteenth owner in New York City. Every week a newborn song appears at http://theacousticguitarproject.com as a free download, along with lyrics, photos, and candid interviews with the songwriter.

A second guitar has been making the rounds in Helsinki, starting with the Finland winner of the Eurovision Song Contest, one of Europe’s most popular TV shows. Singer-songwriters of all stripes have crafted heartfelt ballads and bluesy riffs. No two songs are the same — except, of course, that they all ring out from the same six strings.

With the support of The Awesome Foundation NYC’s October 2012 grant, Dave will be taking the Acoustic Guitar Project to the next level, seeding new traveling guitars all over the world and creating a new website to showcase these songwriters and their musings on musicianship. The project’s songs will always be free and all-acoustic, an unfiltered tribute to the power of music.

Find out more on our project page, and stay tuned for news on this awesome project as it grows!